Bracelet is a set of network configurations and best practices that can be used in isolation or to act as a light-weight version of 4CeeD to be used in labs where an instrumentâs Operating System is deprecated, no longer supported, deemed a security risk and cannot be included on the network.Â

What problems Bracelet attempts to address:Â

Without access to a network to save data, users are forced to fall back on legacy options like memory sticks, paper notebooks, or cobbling together their own unprotected network. This wastes time poses security risks (patches, malware), and forgoes the easy process of data collection and archival provided by modern LIM systems. Bracelet architecture uses white lists, DMZ zones, upstream communication only, and optionally a stripped-down version of 4CeeD with supported browsers to provide the benefits of a lab notebook system to Operating systems as old as Windows XP. Every several yearâs new machines/instruments fall into a cycle where they are too costly to upgrade and must be taken off the network. Already, Windows 7 is quickly approaching its end of life.Â 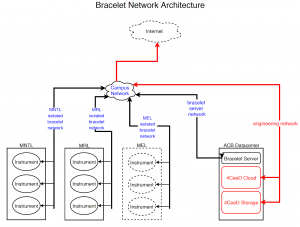 One of the major problems in technology today is the deprecation of older operating systems and the loss of continued vendor support. The most popular commercial operating system continues to be the various iterations of Microsoft Windows. The most recent release as of 2020 is Windows 10. Mainstream support for Windows 10 is scheduled to continue until Oct. 13, 2020, with extended support ending on Oct. 14, 2025. However, in academia and industry, many software services continue to run on legacy operating systems like Windows XP, and Windows 7. Microsoft ended mainstream support for Windows 7 on January 13, 2015, with extended support has ended on January 14, 2020. With the end of life (EOL) for Windows XP/7, Microsoft no longer releases critical bug fixes and security patches. Organizations running equipment on these operating systems can be exploited by hackers in a number of different ways. Different types of malware exist that can cripple a network with ransomware, loss of productivity, spread to other networks, and compromise intellectual property. Attacks like these typically target older operating systems.Â

Machines and instrumentation in the material sciences are typically very expensive items, often ranging in the millions of dollars and expected usage is decades. The vendor software that drives some of these networked instruments is sometimes several iterations behind in operating systems.Â  Vendor software is often proprietary, not upgraded to run effectively on newer operating system versions, or if an upgrade is available it may cost nearly 6 figures in support/maintenance.Â

At the University of Illinois, more than half of the major scientific instruments on campus and their software tools run Windows XP, Windows NT, Windows 2k, and even some isolated instances of Windows 3.11. These machines are offline and either cannot operate on higher bandwidth networks or are not patched as there is no longer support for them.Â

Our goal with Bracelet was to deploy a new infrastructure on our campus across different research laboratories that run scientific instruments with the problems described above. Our initial research led us to focus on and develop a robust cloudlet-based infrastructure at the network edges. This cloudlet was a networked edge device and a surrogate to the real cloud, placed between the scientific instruments and cloud as the middle tier of a three-tier hierarchy: the scientific instrument, cloudlet, and cloud. The cloudlet would be placed within the campus building to shape and protect traffic from instruments in the campus building (e.g., MRL) to the campus node hosting the research cloud cluster. The cloudlet can play a foundational role in keeping the instrument connected throughout its lifetime (10â15 years), continuously providing the otherwise missing performance and security features for the instrument as its OS ages. Past research with BRACELET represented an integrated three-tier infrastructure that integrated and innovated the existing campus network, cloud, and security infrastructure with the 4CeeD data upload service and its robust cloudlet infrastructure.

Our current research found that network shaping, pre-analysis of data before being uploaded to the cloud, while useful, was a more complicated approach to our current use cases. We focused more on finding a way to incorporate our existing DIBBS project, 4CeeD, along with some switch maintenance that would allow users the functionality of the 4CeeD cloud-based notebook storage and improved security.

What problems 4CeeD attempts to address:Â

Most cloud storage solutions donât allow users to annotate information to their files. Images taken from analysis instruments (SEM, TEM, AFM) may often have proprietary file formats that cannot be viewed as a preview without the time/cost of converting to a .tif and losing valuable instrument metadata. It can be very challenging for users to track the various phases of an experiment and attempt to recreate it without a system that offers what 4CeeD does.Â

4CeeD has been a very popular system with students, classes, faculty, and the research staff that maintain the lab instruments.Â

The machines that run Bracelet with 4CeeD have access to a streamlined 4CeeD interface that supports upstream only and a simpler interface to account for older web browsers that run on machines like Windows XP that cannot render modern javascript libraries.Â

The 4CeeD tool can only function when the instrumentâs operating system (OS) is Windows 7 or higher, allowing instruments to have the computational capability and network speed to be part of a distributed cloud platform and to have all the necessary security patches to be connected to the campus network.Â

Users using Bracelet with 4CeeD have limited access to 4CeeD features due to the nature of javascript support, and downstream security. Users can access data uploaded via the bracelet instance 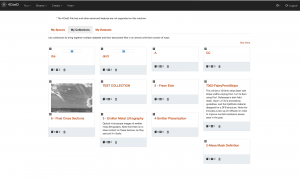 In order to use a Bracelet environment, a few requirements are necessary:

The Bracelet software can be downloaded here:Â

The NSF DIBBs T2-C2 project is a collaboration between: